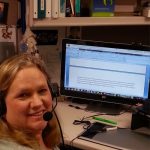 In the last two years, muscle spasms in by back that I used to get periodically have become chronic. In the last three months, they have been occurring on a daily basis. The spasms are triggered by doing the dishes, folding the laundry, drying my hair, or basically anything that requires me to extend my arms out in front of me for an extended period of time. Unfortunately, this includes typing on the keyboard and using my mouse.

Writing my novels under the influence of opiates and muscle relaxers, might have produced interesting results, but probably not a “good” interesting. So, I researched specialized chairs, specialized keyboards, and anything else I thought would help with my plight. What I thought would be a perfect solution, chairs like zero-gravity workstations are on the pricey side. The next best thing and definitely more affordable is Dragon NaturallySpeaking, a voice to text software package.

Considering the use of a voice to text software package caused me to think about how I write. My ideas seem to flow from my brain, through my arms, to my fingers, and then onto the keyboard. I type away effortlessly, writing, backspacing, rewriting, and moving forward with my sentences. For the most part, I’m not thinking, I merely let the ideas flow. So how would this work if I were speaking my words instead of typing them?

I will say that Dragon NaturallySpeaking is pretty impressive. I purchased the premium version from Nuance, which is currently $199.99. The premium edition provides a lot of features. You can use it with many different applications including word processors, email programs, web browsers, and even with web-based email applications like Gmail and Hotmail. The package came with a headset, but you can use any compatible headset. You can also dictate wirelessly using a Nuance-certified Bluetooth headset microphone or even better, you can use your iPhone, iPad, iPod or compatible android device as a microphone. And with the premium edition, you also get a free Dragon recorder app for your iOS device, which allows you to dictate on the go.

Nuance also has a home version of Dragon NaturallySpeaking, which is $99.99 (On sale now for $74.99) at the time of this blog post. The home version provides many of the same features as the premium version, but doesn’t include mobile dictation, full text control in Microsoft Excel or Microsoft PowerPoint, wireless dictation, and a few other features that I don’t believe a writer would miss.

Although I have not yet used Dragon to write a novel, I have tested it with the writing program I use called WritewayPro and so far so good. I’ve also been using Dragon to produce this blog. It has taken me approximately 38 minutes. Yes, it seems like an awfully long time, but this is really the first time I’ve used it to produce anything meant for publication. There was a learning curve. It took time for me to understand some of the commands and I was correcting and rewriting as I went along instead of waiting until I had finished the blog. I also spent a lot of time watching the screen and waiting for the words to pop up, but you don’t need to do that as the software can keep up with your speech.

In time, I know I will become more proficient with the program, but will using this program compromise the flow of my ideas onto the page? That is yet to be seen. I’m hoping that it doesn’t and my back is hoping the same thing.