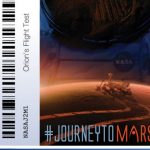 One evening on my way to a bar in the late seventies, I saw a UFO. I know, “On your way to a bar? Really?” Yes, I hadn’t had a single drop of alcohol…yet. It made such an impression that I used the bar’s phone (pre-every-teenager-owning-a-mobile-phone) to call the local air traffic/Air Force. Later, in 2008, I entered my sighting into the National UFO Reporting Center. It was amazing how so many other sightings had similarities to what I and many others have witnessed over the years. Read my UFO report.

Experiencing, in person, the possibility of life outside our universe impacted my life, causing me to look to the evening sky for years. Add to that my grandfather’s work at Cape Canaveral helping support space flights, it was natural I’d want to symbolically board the Orion to travel on its test flight into space (and you can earn frequent flyer miles too!).

On December 5, 2014, my name, along with more than a million other people was carried into space on a microchip the size of a dime. The original launch date of December 4, 2014 was postponed due to a rogue boat (in the water too close to the launch area) and Mother Nature (the wind). Even before the launch delay, the Orion mission encountered a payload vulnerability landing some on the Orion’s No Fly List

After shooting up into space to an altitude of 3,600 miles above Earth, four and a half hours later the Orion successfully splashed down into the Pacific Ocean near San Diego. The mission was considered successful as it reached an altitude 15 times farther than the orbit level of the International Space Station and tested systems like heat shield and parachutes that are critical to the future of Orion and its ultimate mission to Mars.

Would you choose to fly to Mars?  Find out about the next opportunity to #JourneyToMars