Lights are on, somebody’s dead 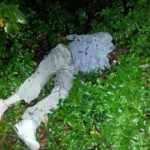 After a few glasses of Cabernet Sauvignon, late at night, in the woods behind my hotel, I found I wasn’t alone.  What could have become an unfortunate event in a murder mystery, was in reality something very cool. Not only was I not alone in the woods, I was with a large group of writers. We were all there to experience what it would be like to view a crime scene  under various levels of light.  The show and tell was all part of the 2014 Writers’ Police Academy held in Jamestown, North Carolina. This blog is the first in a series and shares what I learned that night about lighting and its sights and sounds.

The smallest yet most targeted way of viewing a crime scene is with a flashlight. See the details, not the big picture.  We were able to identify jewelry and a gun hidden by the leaves. While I learned what it would be like to use a flashlight to search for evidence, I also learned what it would feel like to shine a light on a body. As the writer of amateur sleuth novels, I could imagine what my main character might feel like if she were to walk upon a scene like this with only a flashlight. After spotting the foot, I know the fear and suspense would grow inside her as she moved the flashlight upward in search of a face. And if all she found was a leg, a single part of a dismembered body? She’d run for her life.

Scene exposure increases when using floodlights but there are still a lot of dark areas beyond the scene. The flashlight was still useful in this situation, helping pick up details like the prescription drug bottle next to the victim’s face. The floodlight required a generator, and listening to the hum brought back memories of when I lived in the last house on a dead end road across from Piscataway Creek in Maryland. One night when I came home, the police were blocking the road to my driveway. I joked with my then husband that they’d probably found a dead body. The police officer stopped us. It turned out that  it wasn’t a joke. They had actually found a dead body. The crime scene was kept lit and throughout the night as I lay in bed, I could hear the hum of the generator.

Lit up like a football field! The light used during this scenario was the Airstar Sirocco.  Portable and fits in a bag, but still needs generator. Although the light covered a large area, much of the detail where the body was found was lost in shadowy pockets. The large amount of light allows for more immediate investigation of the surrounding area, provides a level of safety for personnel working the scene, and doesn’t leave many places to hide (something criminals and often times my main character like to do).

Even under the influence of some tasty red wine, I was able to appreciate the conditions under which our police and rescue personnel must work.  And most importantly, for my writing, I was able to gain a better understanding of how lighting can play a role in evoking feelings from the reader as the lightness and darkness around my characters change.

P.S. No real people were killed to stage the crime scene