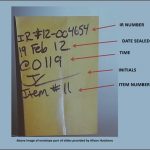 When every episode of CSI ends up with investigators doing the crime scene walk through using only flashlights, I figure it isn’t really how things are done.  And I’m smart enough to know that the same person who collects the DNA doesn’t run the DNA testing, and especially not in an hour. But, what else didn’t I know about evidence collection?

I found out when I attended the 2014 Writer’s Police Academy held in Jamestown, North Carolina. This blog is the second in a series and shares a few tidbits on evidence collection and chain of custody (the first blog covered crime scene lighting). Alison Hutchens, Forensic Supervisor with the Durham Police Department taught the “Crime Scene Processing/Evidence Packaging” class which was very interesting and packed full of information, so if anything within this blog is incorrect it is my lapse in attention or my unreadable handwriting that is at fault.

Anything can be evidence. Any piece of evidence could link a suspect to a scene, or one scene to another scene (e.g. serial rapists, drive by shootings). Evidence can stand on its own or be further processed (Latent Prints, Trace – hairs & fiber, DNA – blood-saliva-semen).

Paper or Plastic? Answering that question at the grocery store is not likely to have an immediate impact on anything, but at a crime scene it can make or break a case if evidence is put in the wrong container. An example is blood stained clothing. Putting clothing in a plastic bag can deteriorate the evidence because moisture will be retained, so it should be placed in a paper bag as well as many other types of evidence.  Many of the plastic evidence bags on television shows are used because they make great television. Proving chain of custody is the most important thing! It doesn’t matter what evidence you collect if you can’t prove where it was collected and where it’s been since the time it was collected.

One of the details covered in the class was how evidence is handled. For example when placing evidence in a paper bag or envelope, it is sealed with tamper proof tape and the information shown in the image above is written on the envelope or bag. The writing must go across the tape onto the paper. Generally only forensics employees are allowed to access and handle the evidence. Detectives can handle it but must wear gloves; however most do not want to handle it because if they do, they can be called to testify.

Alison Hutchens covered so much more than chain of custody during the class. Topics like Photographing and Documenting the crime scene, Latent Prints, DNA Processing, GSR, roles of the CSI, were also talked about. It was all very interesting, but way too much to put in a single blog. So, instead of covering all the subjects, I did a little extra-curricular research and found this great document, Crime Scene Investigation: A Guide for Law Enforcement, at the National Institute of Standards and Technology website. The document was originally developed by the Technical Working Group on Crime Scene Investigation and the revisions within this document were conducted by the National Forensic Science Technology Center.