The Dogs under my Desk – Boomer 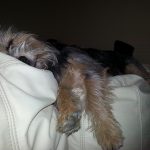 The Laziest Puppy in the World

I’m lucky to have had my heart touched by fourteen dogs (not at the same time!), several cats, birds, hamsters, fish, a turtle, a small snake, a tree frog, and even a squirrel. Living with so many animals taught me that just like humans, animals have their own personalities. But not until Boomer did I learn how drastically different those personalities can be especially when it comes to the everyday life of an animal.

Earlier installments of The Dogs under My Desk blogs, introduced Tidbit, my Bichon Frise, and Skipper my blind Beagle. Now, I’d like to introduce Boomer, a Schnoxie (Schnauzer/Dachshund mix), and the slowest dog I’ve ever met. We adopted Boomer along with Skipper on Fourth of July 2013, which is why we named him Boomer. Little did we know his personality would turn out to be less of a bang and more of a rumble. So much so that we christened him the laziest puppy in the world!

Boomer’s slowness emphasized the peculiarities of our other dogs, which in turn made me think about animals as characters in my writing. I realized I didn’t need to have my animal character balance a treat on their nose while dancing to music, ride a skateboard, surf, or even drive a car to make it come alive. All I needed was to show the little things they do throughout the day. Here are a few examples of how my “real life” pets express their personalities in everyday life:

Eating – Boomer waits patiently for me to set down his bowl.  His action or more precisely his inaction highlights the response of my other dogs. Skipper, the blind beagle responds frantically to the sound of kibble as I shake his bowl. In his excitement, he often knocks kibble out of the bowl before the bowl makes it to the floor. Tidbit watches me and won’t start eating until I sit down on the chair next to her bowl.

Walking – Honestly, there are days I feel like the pied piper as my three “co-workers” traipse behind me through the house. Boomer saunters along and if I pause for even a second he lays down not wanting to expend more energy than necessary. His actions are in direct contrast to Tidbit who is on my tail the minute I get up out of my chair. At times I don’t even realize she’s there because she always stays behind me. And Skipper? He stops to scratch every few steps before finally getting on his way.

Sleeping – Boomer spends most of his time sleeping upside down, a sign that he is quite comfortable in his surroundings. Tidbit sleeps in a ball with her tongue sticking out. Skipper, in a half curl, tucks his paws under his chest and lets out a sweet little sigh as he falls asleep. Tidbit is always the first to rise, followed by Skipper, and then Boomer only if it’s absolutely necessary.

Navigating Stairs – Boomer stands at the top waiting to make sure I’m not going to turn around and come back up a few minutes later lest he waste any steps. Though Tidbit has four legs, she prefers to run down the stairs on three. And Skipper, well he’s been known to go down the stairs like a rabbit downhill skiing!

My boy Boomer helped me see more clearly the importance of the little things in a dog’s life and he also made my dream of having a smiling dog come true. Boomer will often greet people with a smile exposing his full set of teeth or at times he’ll just hand out a grin (see photo below).

I hope sharing my dogs’ eccentricities might help demonstrate the little things that can bring an animal character alive (and shhhhhh….secretly I hope it might encourage someone to become a multi-pet household by adopting from a shelter). Boomer under my Desk